Coming Soon To A Theater (Probably Not) Near You

I really wanted to finish the overhaul and update before I did any new posts, but it's taking longer then I anticipated and I just can't hold off talking about the news any longer! 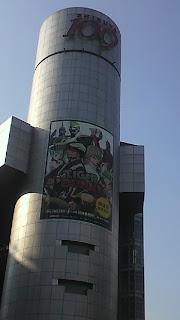 It's only appropriate that they promptly updated the 109 building to reflect the news that we'll be getting not one, but two movies in the coming year. No word yet on content or context, but new footage was shown at the Hero Awards that doesn't appear to correlate with anything that's happened so far. My knee jerk reaction, of course, was trepidation over no season two announcement, but as it began to sink in my worry quickly subsided. Production on a full season will take some time, many estimated that the earliest would be 2013, so it could very well still be in the cards. Lending credence is the word that the NEXT project will have at least 4 parts, with the Awards being first and the movies being second, which leaves two more glorious stages. It seems we're only on the precipice of everything they have in store for us.
On the Market front? As is only natural, the Awards booklet SOLD OUT during the first show in many places, and it's not surprising. For one, it's not T&B if it's not SOLD OUT, and for another it several brand new illustrations, including this gem: 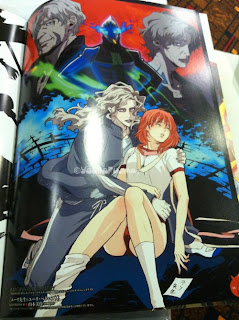 Don't think about it to hard, there's no context for it other then what the artist dreamed up.
A couple of new items also showed up on display for those waiting to enter the show. First is this set of massive posters, 1700mm (over 5.5 feet) in length, to be sold as a pair through Bandai's premium store. They're already on sale and retail at 4935 yen, and you'll need to contact a shopping service to pick them up when they come out in February. 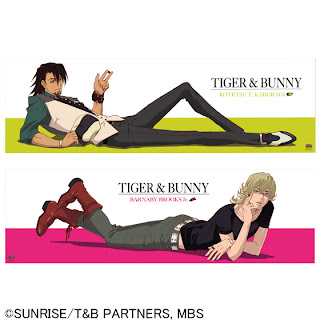 This Lunatic themed blanket was also spotted, it hasn't appeared at any retailers yet but it'll be 3000 yen and be out in time to keep us northern hemisphere folks cozy this January. I'm hoping he's sewn it himself and it keeps you warm with the fires of JUSTICE. 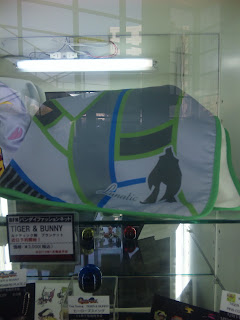 A couple of items were revealed on the Bandai Namco's channel that I haven't had a chance to cover, the biggest one being a new set of Red Monkey collaboration watches, this time being two variations on Blue Rose. Expect the same price and sell conditions of the previous releases. 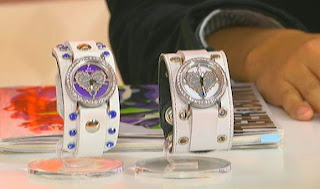 New iPhone 4/4S cases were revealed, all by artist Mori Chack. These will be out in February at 2200 yen. I'm not quite sure about how exclusive they will be, but they're currently only listed with Bandai.
They showed off Ivan's jacket quite a bit as well, complete with shu shu~, but nothing we haven't seen before. 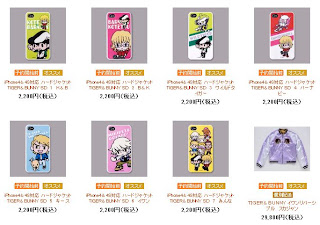 Last, but certainly not least, we learned more details about the previously mentioned Valentine's Day cake. Along with the cake, which is layers of chocolate sponge cake, chocolate mousse, raspberry sauce, chocolate icing, are a set of figures depicting Kotetsu and Barnaby as bakers. The whole set sells for 4200 yen, and you'll have to talk to your shopping service about possible food shipping policies. Not something you want coming via SAL. 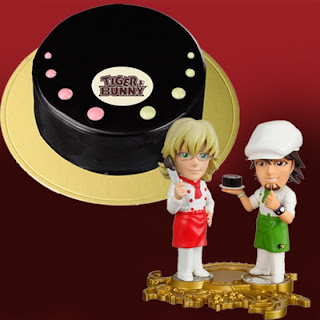 Concerning the blog, I'm working hard to add images for all the items, as well as cleaning everything up so everything appears cleaner and more user friendly. It should be complete in a day or so, as most of the grunt work has already been finished. Your patience is always appreciated and if you have ideas on what could improve the blog I'd be happy to hear. I couldn't do this without my friends on twitter, so thanks and thanks again to all of you!
As always, see ya~
Posted by Royale at 11:56 PM